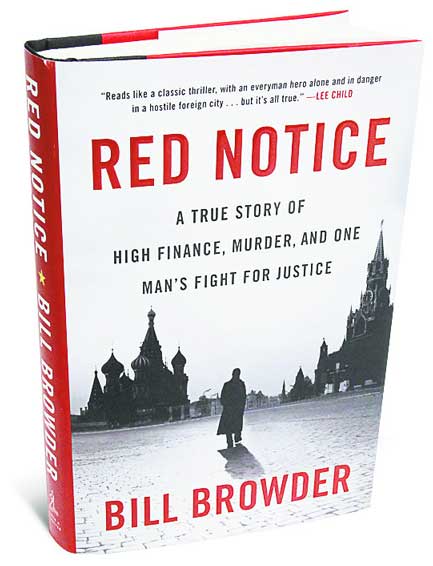 Nasha Canada: -You spent the first 10 years in Russia as a successful investor and the past 10 years as a critic of Putin's regime trying to get justice for the late Sergei Magnitsky. Your devotion to Sergei's memory resulted in Magnitsky Act that was signed by Obama in December 2014. Which of these two periods of your life you are proud of more?

Bill Browder: - I'm proud of both. The challenges of business and human rights both brought great rewards, but certainly fighting for justice is much more meaningful than fighting for money.

- Overall how would you judge the effectiveness of the Magnitsky Act?

- We can judge the impact of the Magnitsky Act by looking at Putin's reaction to it. After it was passed, he took the most extreme steps imaginable by banning American adoption of disabled Russian orphans and putting Sergei Magnitsky on trial posthumously.
In practical terms, the Magnitsky Act creates the first set of consequences for human rights violators in Russia ever. While asset freezes and visa bans are hardly comparable to torture and murder, they are a lot better than the total impunity many human rights abusers enjoyed before the law was passed.


- Recent developments in Ukraine led to a deep polarization of opinions amongst Russian speaking immigrants in the west. Many fiercely defend Putin's actions largely due to the influence of Russian state TV stations. One can imagine that the propaganda is only stronger within Russia. Do you think that the removal of Mr. Putin as the country's leader will remedy the situation?

- It all depends on who removes Putin. If he's replaced by a popular revolution, you could get a leader who doesn't deceive the population and steal like Putin. But it is also possible, Putin is replaced by someone just as nationalistic as him. The problem is that nobody really knows.

- Do you think that Russians are capable of what Ukrainians have done on the Maidan?

If the economic situation in Russia gets bad enough, I think the Russians are definitely capable of a Russian Maidan. This is what scares Putin and everyone in his regime most. In my opinion, the war in Ukraine's main purpose is to distract the Russians from their economic worries specifically to avoid people with pitchforks showing up on Red Square.

- We know that Red Notice will soon be published in Russian and available on Amazon. Are you planning to sell Russian edition of the book in Russia? Or,do you think it will be banned as usual?

- Unfortunately, Red Notice has been effectively banned in Russia. There's not a single Russian publisher or online book seller who will touch Red Notice in Russia. I'm sure Red Notice will find its way into Russia like Samizdat, but it will happen on its own by Russians who want this story to be told.

- There is a saying that it is not a tragedy when a dictator considers a citizen a slave, but it is a tragedy when the citizen agrees with it. Do you think Russia today is a slave state

- I think Putin is trying to make Russia his own personal fiefdom where he can take anything he wants. But I also think that with modern day communications and the Internet, his long term success at doing that is limited. Either he has to go the way of North Korea and completely cut everyone off, or eventually his population will no longer tolerate it.

- British authorities have finally started to fight the money laundering from Russia. Can you give us at least an approximate number of the stolen Russian money that invested in British banks?

- There is hundreds of billions of dollars of stolen Russian money in UK banks, real estate and shares.

- Many families of Russian government officials live in Great Britain, specifically in London. Did you have any contacts with those wives and children of Russian beaurocrats? What is their opinion of Putin?

- I don't associate with these people in London. But surely they will be hoping he doesn't lose power because their livelihood depends on it.

- What is your favourite memory of Boris Nemtsov?

- Are you personally afraid of Vladimir Putin?

- He surely would like to get rid of me, but I don't live in fear.